For some reason there is this idea that forcing anything on a person is a good idea.

Don't want health insurance? -I don't give a crap, you get it or the IRS is gonna bitch slap you with a fine.

Want an AR-15 because you like shooting sports or maybe you are just a good-ol-boy and going out and putting holes in cans is your idea of a good weekend? Tough beans dough head *BANNED* (in California anyway)

Don't give a crap about if your food is healthy - or maybe you just want a double cheeseburger? Guess what the same people that want to force people to have health insurance want to force restaurants to put "nutritional information" on menu boards.

Now - don't get me wrong this doesn't rise to the level of many other egregious over-reaches of governmental power - as a whole the "Affordable Care Act" is whore-ably worse.

The point is this; the government, and many (if not all) of the institutions that prop up it's power (Left and Right alike), well, they think you're stupid. 'We have to tell you to get insurance, because you are too stud to know that yourself.' 'We have to tell you what plants are ok to grow and use as medicine, because you are too stupid to know that yourself.' Want to retire eventually? Yup you are too much of a dolt to figure that out as well so we will just force you into saving by "investing" in an ill conceived pyramid scheme.

What everyone needs to come to grips with is that Democrats and Republicans are not different sides of the same coin, they are in fact on the same side of the coin; they just lay claim to different sections, like a piece of totalitarian pie. And just like left over Thanksgiving pie, we either accept that it is bad for us and toss it in the trash or we slowly eat it one piece at a time until it all gone. Republicans want to control what plants you can use and how you can use them. Democrats want to control what you can sell and how you can sell it. They both want to control the "masses" they just disagree on what to control. The other side of that coin would be a refreshing change. But the other side would be parties and power centers looking out for what is best for those they represent, not attempting to prop up their own power.
Gripes of: Unknown at Tuesday, March 29, 2016 No comments:

Is it possible for our kids to be better with technology then their parents?

Is that what they call it? The cycle where kids are better with technology then their parents are?

It would not surprise me at all to see that same trend continue - not just because my kids are so awesome but because there are so many tools out there that are used to teach and learn those skills.

When I was growing up there wasn't really even an internet. I remember doing book reports in school using a physical encyclopedia - 26 individual books that made up a rudimentary sort of Wikipedia. Now things move much faster. The research that took me several hours of combing through different volumes, getting rides to the library and then slowly plunking out a couple pages worth of a report just to hear zrzrzrzrzrzzrzrzrzrzr bmmmmmmmmmt zrzrzrzrzrzrzrzrzrzrzzrz bmmmmmmmmm as it printed from our dot matrix printer. We even had "Print Shop" so I could make fancy multi-page banners!

Last week my wife an I helped our oldest son write his first report on Cheetahs. I was utterly amazed by what he was able to find. Facts about their eating habits, digestion, bone structure, endurance and their speed.

When first wanted to learn coding or website design I couldn't really just Google a question - even "broadband" speeds were a fraction of the speeds today; a simple search would take stupid amounts of time. It was literally faster to go to the library and check out a book (ikr?) then to try and look it up on the internet.

Now - there's an App for that. Not only is there a host of online schools and education companies there is literally apps designed to teach kids programming and logic skills. Games that let you use logical building blocks to accomplish a specific task. One called "The Foos" has numerous pre-built levels of increasing difficulty it also lets kids engage in an almost multi-player mode where one person could build a level and set an objective then another could use logic building blocks to accomplish the task. And I am not just talking about a movement block - I am talking about things like an if-then-else block that allows kids to practice as close to real programming as you can get.

I am really glad to live in a time when there is so much available to almost everyone. With programs and products like One Laptop Per Child and Raspberry Pi the resources available to develop those skills are more and more available to low income areas.

Think about this; it was not all that long ago that "DIY" meant building a garden box or fixing a sink. Now almost anything you want to do has a 5 minute How-To video on YouTube. Want to build a LED light setup for a cosplay outfit? Yup it's there. Make a rag rug like your Grandma? That's there too. Now DIY means almost anything - from integrated circuits to crochet. Technology and how we use it is making that possible.

So to answer my question, Can kids of today be better with technology then their parents? Yes, but they will have to work hard. With so much available to teach new skills it is easier for parents to keep up. Kids somehow seem to be able to climb steeper hills at a faster pace with less energy if we don't keep going at a decent clip they will easily pass us.
Gripes of: Unknown at Monday, March 21, 2016 No comments:


President Trump today confirmed that the $200 billion deal he negotiated with North Korea had produced and tested it's first successful missile. The deal which was personally negotiated between President Trump and Jr. Under Secretary of Defense Contracts (a sub department to their Department of Anti-American Warfare it-self a sub department of the larger Department of warfare) where he gave U.S. plans of several current generation ballistic missiles in exchange for a North Korean pinky promise to stop hating the U.S. so much.

The highly criticized deal was the result of President Trump's promise to "negotiate" peace with North Korea. The deal included several U.S. military contracts being given to North Korean arms manufacturers (all wholly owned by the North Korean Government) in which the U.S. would purchase over $200 billion in ballistic missiles, cease maritime drills with South Korea and give Korean President unrestricted access to a bedroom suite in the Trump House (the former White House) in exchange for allowing the U.S. to build a Navy base that will house North Korean ships and be entirely staffed by N. Korean personnel as well as a "verbal" agreement to "reduce anti-American propaganda campaigns."

How to Actually Beat Trump.

What's worse is that no one in any campaign has been able to figure that out. Apparently none of them have dealt with a bully before - or they are bullies themselves and don't know how that works - either way the strategy to address the big haired buffoon needs to change or he will sail straight into the Trump House (because you know he will rename it as soon as he moves in). 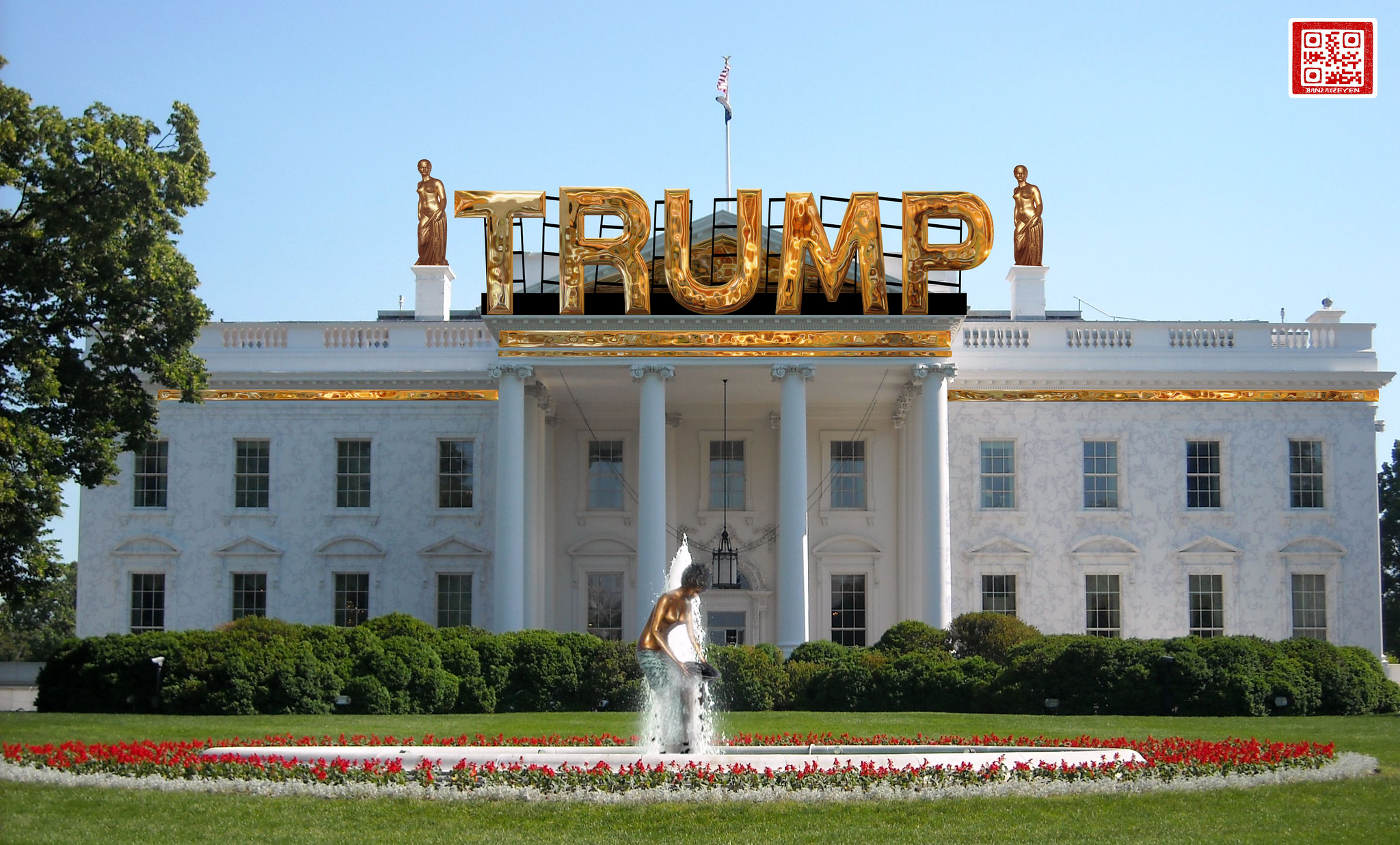 Funny thing about that picture? It was created in 2008 - Prophetic? Maybe. Fierce? Definitely.

What are his opponents saying? Ridiculous things like Kasich saying he will "not take the low road to the highest office in the land." Idiot. What about Clinton saying he had laid out a "really dangerous path" - Stupid.

What can be done? If anyone is going to stop Trump (including Clinton) they need to use their one true instinct - fight or flight - and stick to it. Either way they disable the Bully.

Kasich - anytime for the foreseeable future when you are asked about Trump dismiss the question with a slight shake of your head wave your hand a little and say "he is irrelevant" and say something like "I think the Presidential pet will be guinea pigs. I really like cavies - especially the cute little long hair ones." - See what I did there? Now instead of people thinking you are afraid of Trump they relate Trump with guinea pigs. You might even think about hiring a comedian to help with some new lines.

Clinton - Same as above only tailor it to his anti-feminist views by saying something like "he probably thinks my only place is in the kitchen, I wonder how he will like my Whoopass cake?"

Fight:
There will be times in the election when you will be cornered and won't have an option. Let me be clear, getting pummeled is not an option. You have to follow the guideline "if they bring a knife I bring a gun." A Presidential debate is not a regulated sport like MMA or Professional Boxing. It's a street fight. Throwing sand in his eyes, punching the groin, pulling hair; it's all fair. If he makes a misstep you need to destroy him. If he throws a job you side step and Judo chop him in the throat.

You both need to take every opportunity you can to belittle and marginalize him. Make it clear that there is one candidate and one clown. Start the debate by saying thank you to the host and add "and as always I am grateful to be able to share the stage the Trumps hair - what a magnificent mane of golden locks." Then call him out. When a tough question is asked and Trump gives a B.S. answer yield your time by saying "[moderator] I would like to yield my time to Mr. Trump to more directly answer your question - he said he would negotiate with North Korea on nuclear arms despite a total unwillingness by that government to do so. I would like to hear how he would make that happen" or "...to more directly answer your question - he said he can get Mexico to pay to build a fence on the US Mexico border I would like to hear how he would accomplish that." - then take a half step back from the podium look over and hold your open hand towards Trump. Cut him off instantly if he strays.

Remember: "You say it best, when you say nothing at all." His shear buffoonery will defeat itself.

Why do Democratic Presidential candidates think I should be a racist?

We had some great commentary on race relations from the recent Democratic debate. I for one don't want to let Bernie Sanders hog the spotlight because Hillary Clinton deserves it too. Of course Sander's comments were more incendiary but we should be just as frustrated with Clinton's pandering remarks that were laced with backhanded rhetoric.

Let me summarize how I took their combined comments:

Ok - in  fairness I am reading more into it then the comments and context warrant. But that is my perception and frustration with "race relations" in the US. Here is what I don't understand, why do we continue to make a big deal of this?