How To: Four way stop - the beginners guide.

More on how to drive and not irritate those around you. Now focusing on how to handle the dreaded four way stop.

This should be logical for anyone that has been driving longer than two weeks; yet some drivers seem to really struggle with this.

We will start with the basics - because apparently they were almost entirely missed by far too many people.

In this diagram who proceeds first? 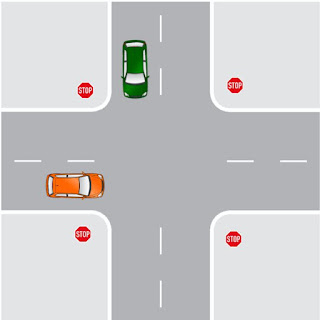 Seems simple enough - the Orange car has the right of way.

Why is that the case?

Now raise your hand if you have ever been the one in the "Green" car and had the driver of the "Orange" car try to wave you through. I bet almost everyone has either done that or had someone do it. Why is that so stupid?

If the Green car goes first it has to clear the WHOLE intersection before the Orange car can pull out.
The reason this matters is not for just those two cars but because of the domino effect it has. The second scenario can take significantly longer. If that is multiplied in a busy intersection it can result in big delays. The funny thing is that come people (idiots) might be saying "I am just being courteous." No - you are being a control freak. By not following the same principles you are causing delays for everyone that comes after you. Not very courteous.

Now for something a little more advanced.

The Orange car is turning left. Who goes first?

That also let other cars flow through faster as well.


Really this is something everyone should already know. Just use common sense and stop trying to wave people through to "be nice" - you are pooping on all the cars after you, just to be nice to one person. Stop it.
Gripes of: Unknown at Friday, April 15, 2016